In the evening, I took a tripod and went to familiar places to take night pictures. I started the photo session at the Almozara bridge. I was already here yesterday, but I was too lazy to carry a photo bag on an evening walk, so I only had a wide-angle lens. (Moral - always carry a full set of optics with you!). 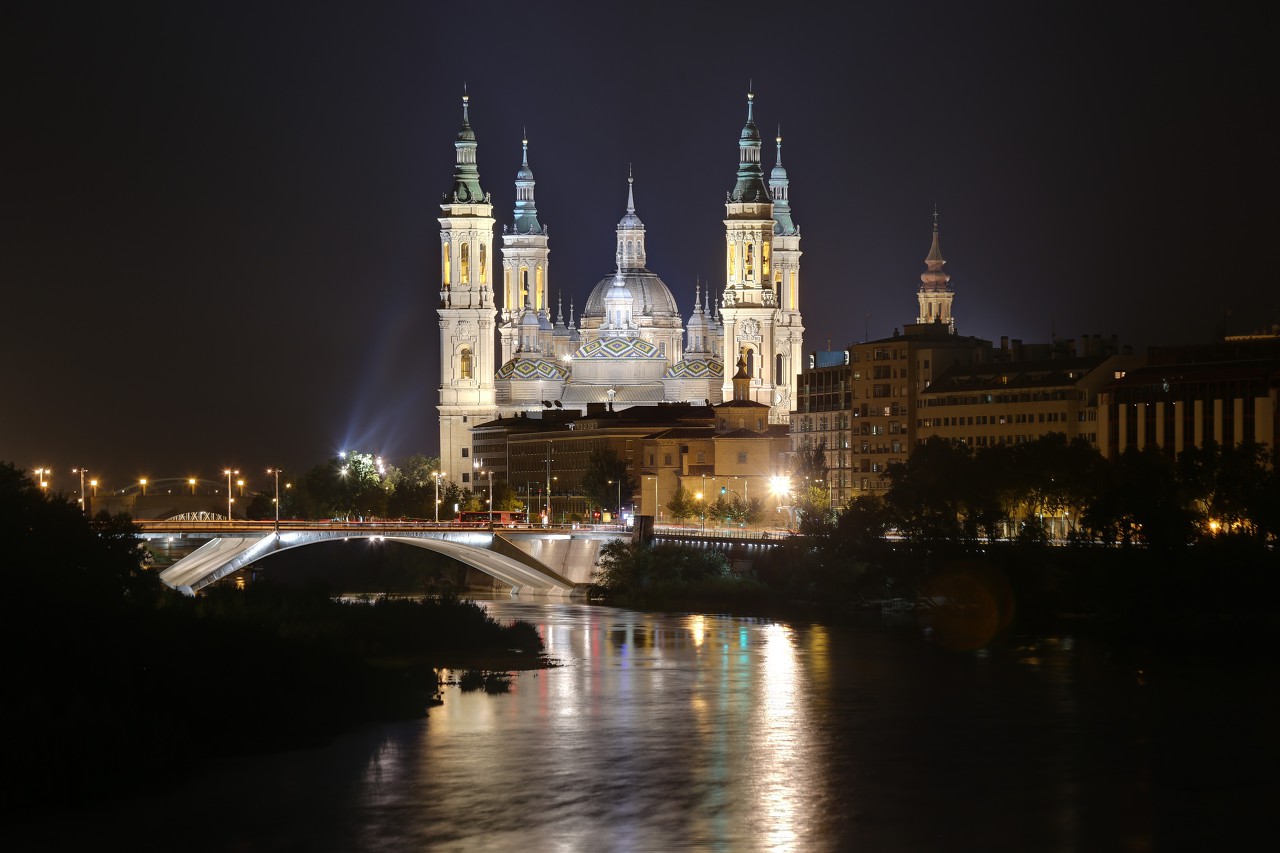 Today, with the help of a telephoto lens, we will try to see the Basilica of Our Lady of the Pillar better. Unfortunately, you won't be able to get perfect sharpness on the bridge, because cars drive on it, and the pedestrian path that rises above it is often added by night joggers and cyclists. But still the Canon stabilizer was on top even with a long shutter speed. 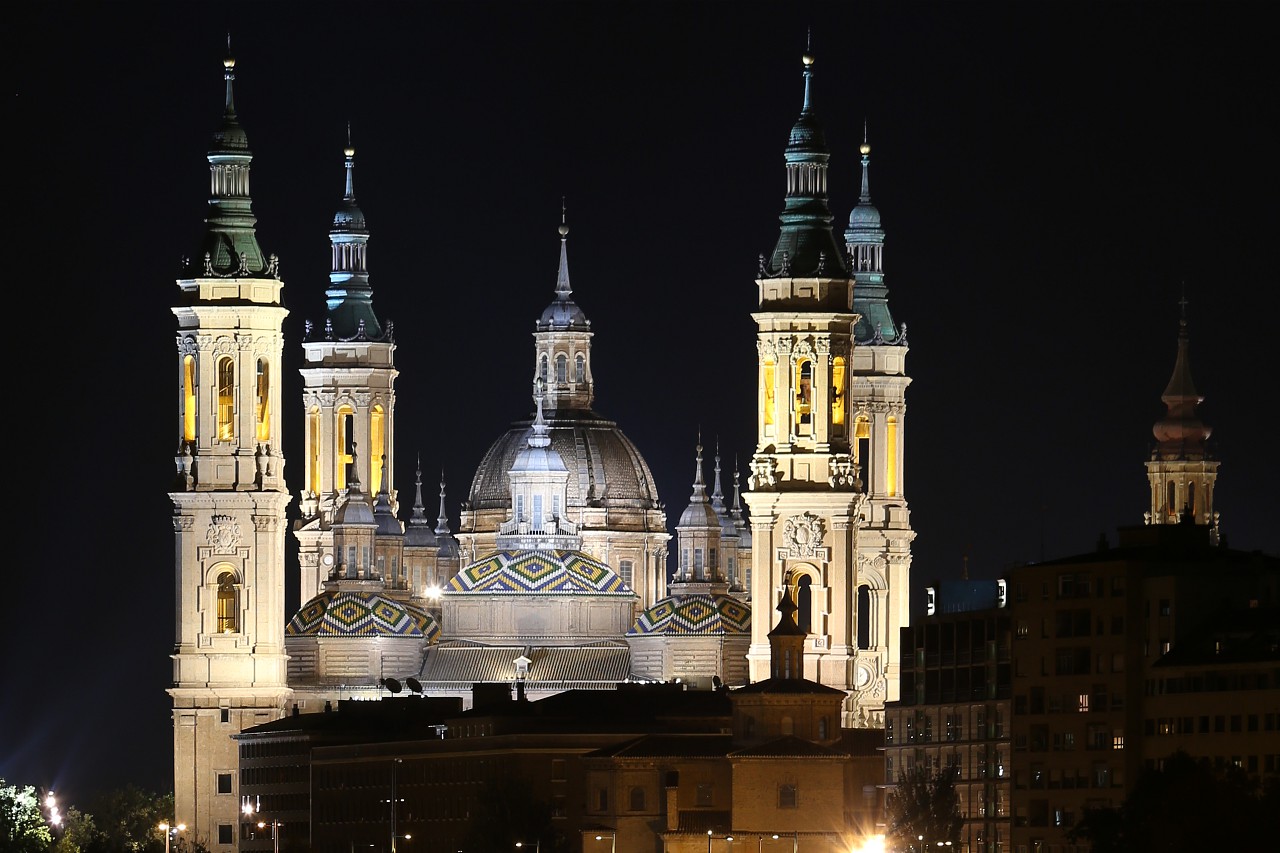 To the right, the bell tower of the Church of the same name, the most important monument of architecture in the style of "Aragon Mudejar", rises above the San Pablo quarter".

Then I went along the embankment towards the bridge of Santiago, behind the line which starts from the historical area of Zaragoza, Cesaraugusta, on behalf of the Roman town. Very similar to the Arabic word "Zaragoza" came from this name, which changed its sound in the Muslim era. 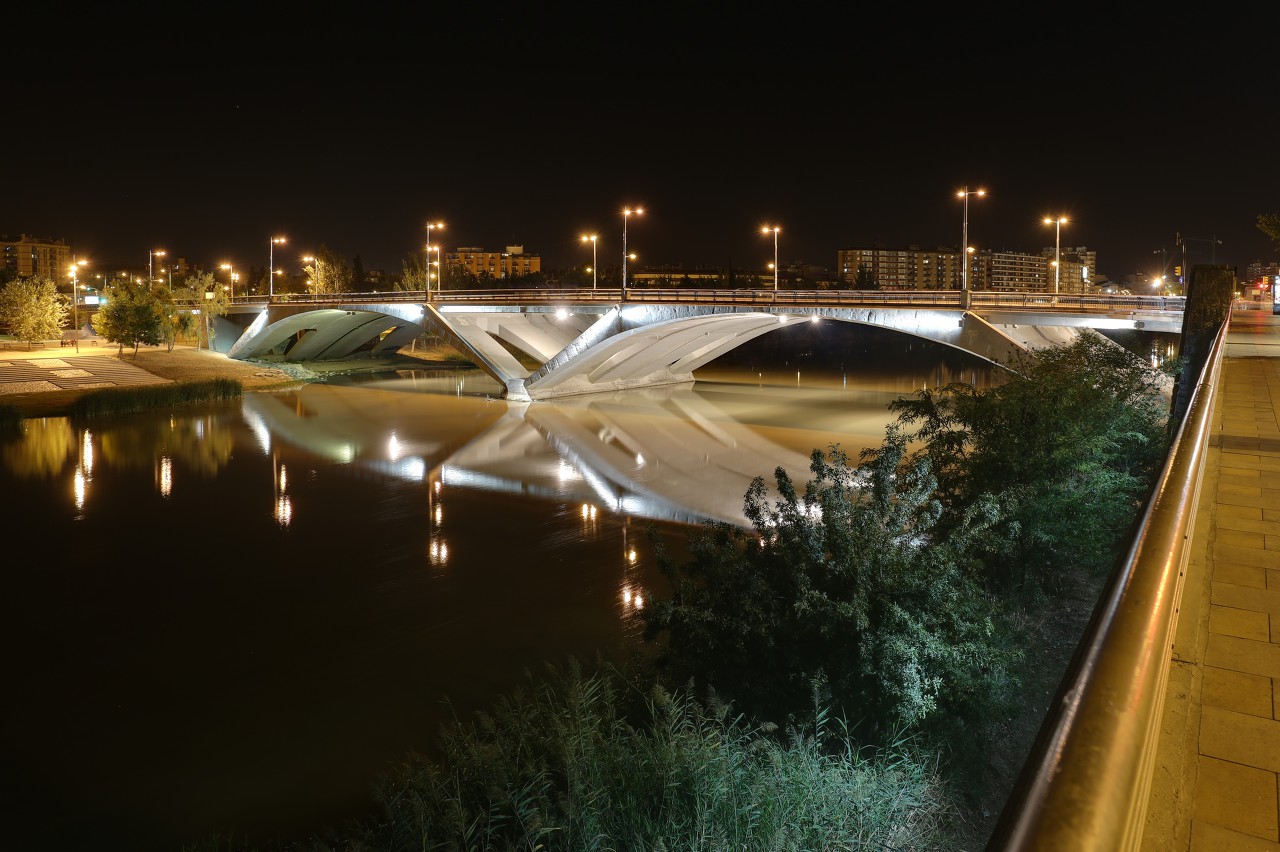 Along the embankment I reached the Cathedral. 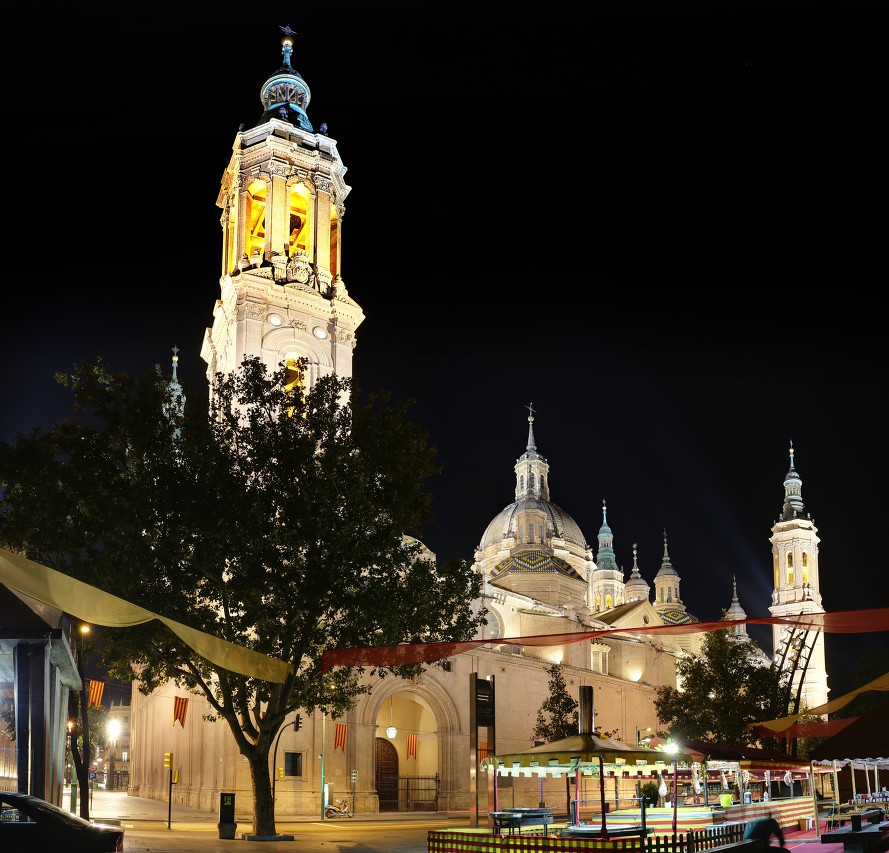 This morning, there are endless sheds with kitchens of food vendors - the city is preparing for its main holiday-the festival of the Virgin Pilar. 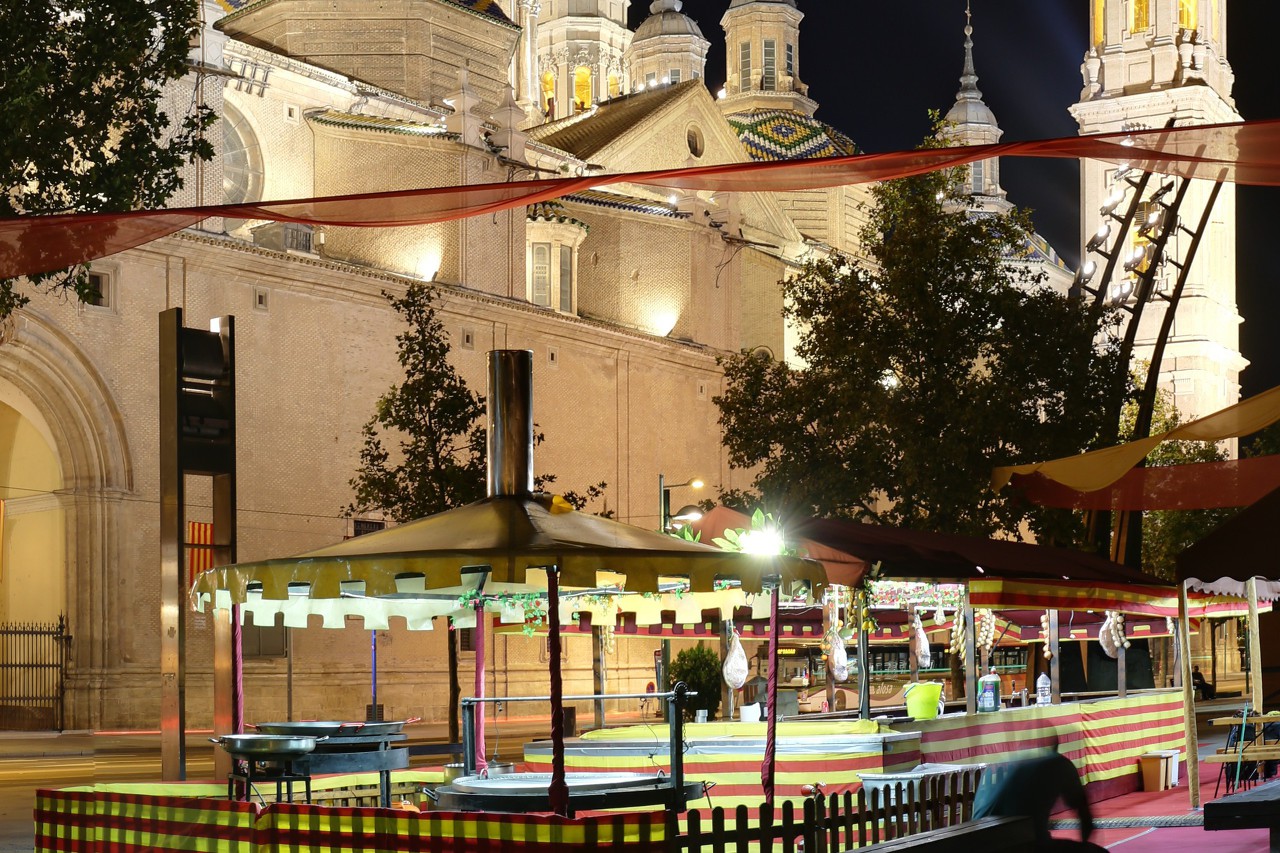 Then I walked over the Stone bridge, which offers the best view of Pilar Cathedral. 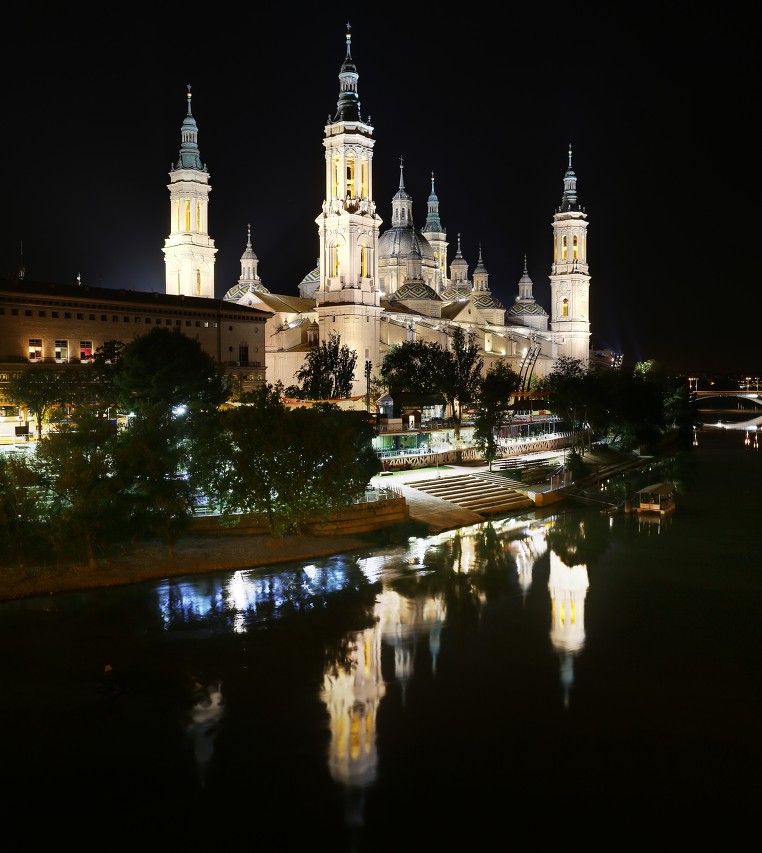 From the bridge I went to La Seo square with the Cathedral of the Saviour of Zaragoza. This is a unique city, even two cathedrals in it-the virgin Pilar and the Savior! To the right of the bell tower is a futuristic building that houses the excavations of the Roman forum. 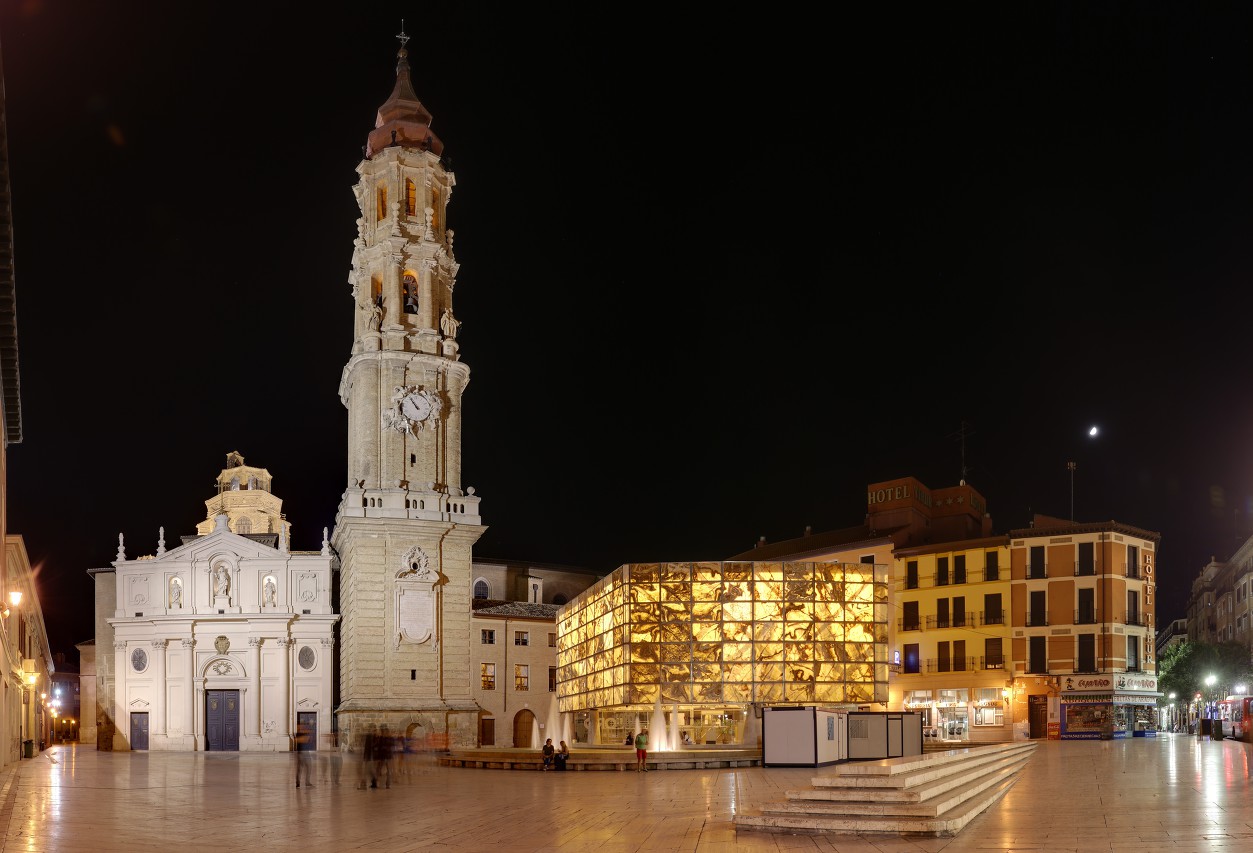 A large stage has been installed in front of the exchange building, where the main events will take place. Pilar square stretches for 400 meters, and it will be impossible to see what is being done on the stage of a large part of the audience. Therefore, several large screens are installed on the square. 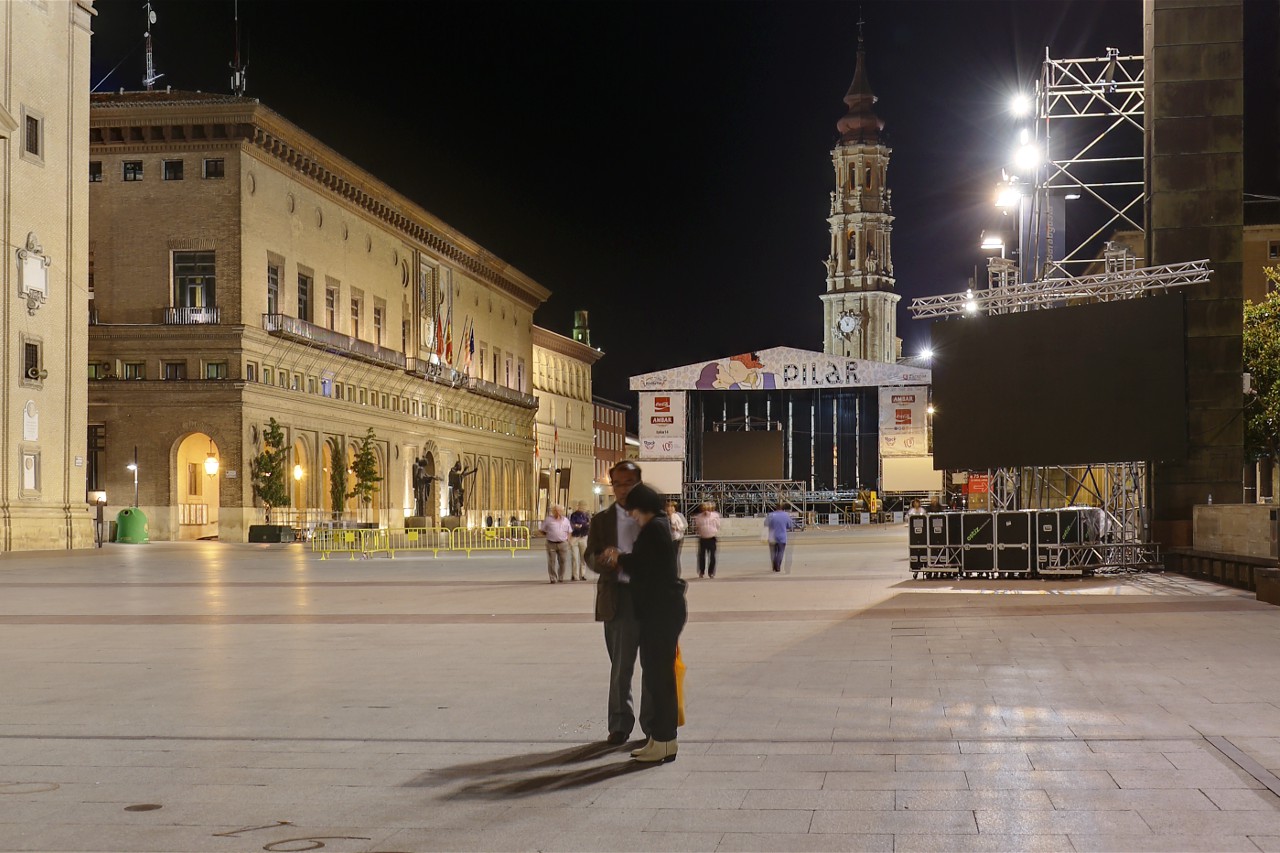 At the other end of the square, another scene is visible. In 2014, the festival was held from 3 to 13 October, I regret that I do not have time to see this wonderful holiday. 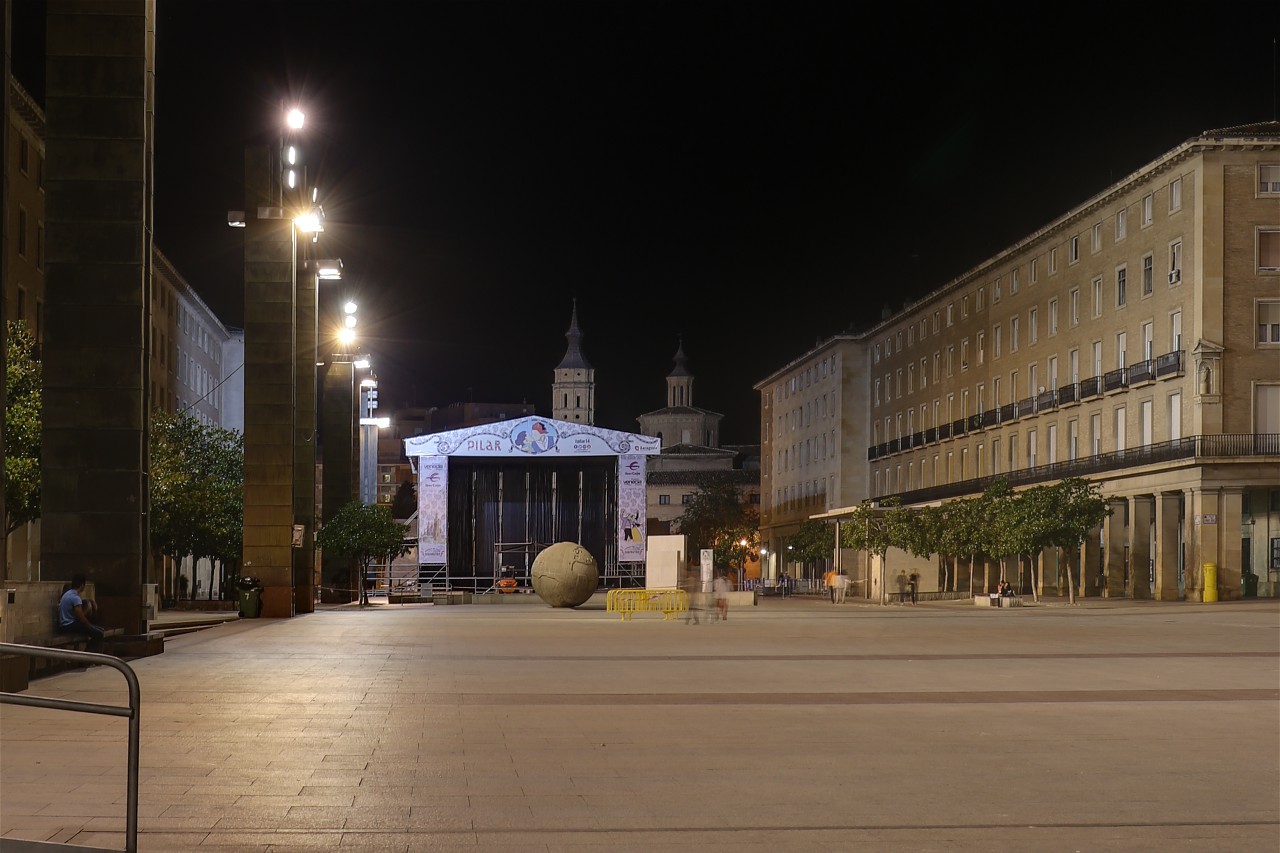 Basilica of Our Lady of the Pillar impresses with its scale. Its 130-meter facade occupies a third of the length of the square. Even with a wide-angle lens, you had to make a panoramic photo to capture only the central part of it. 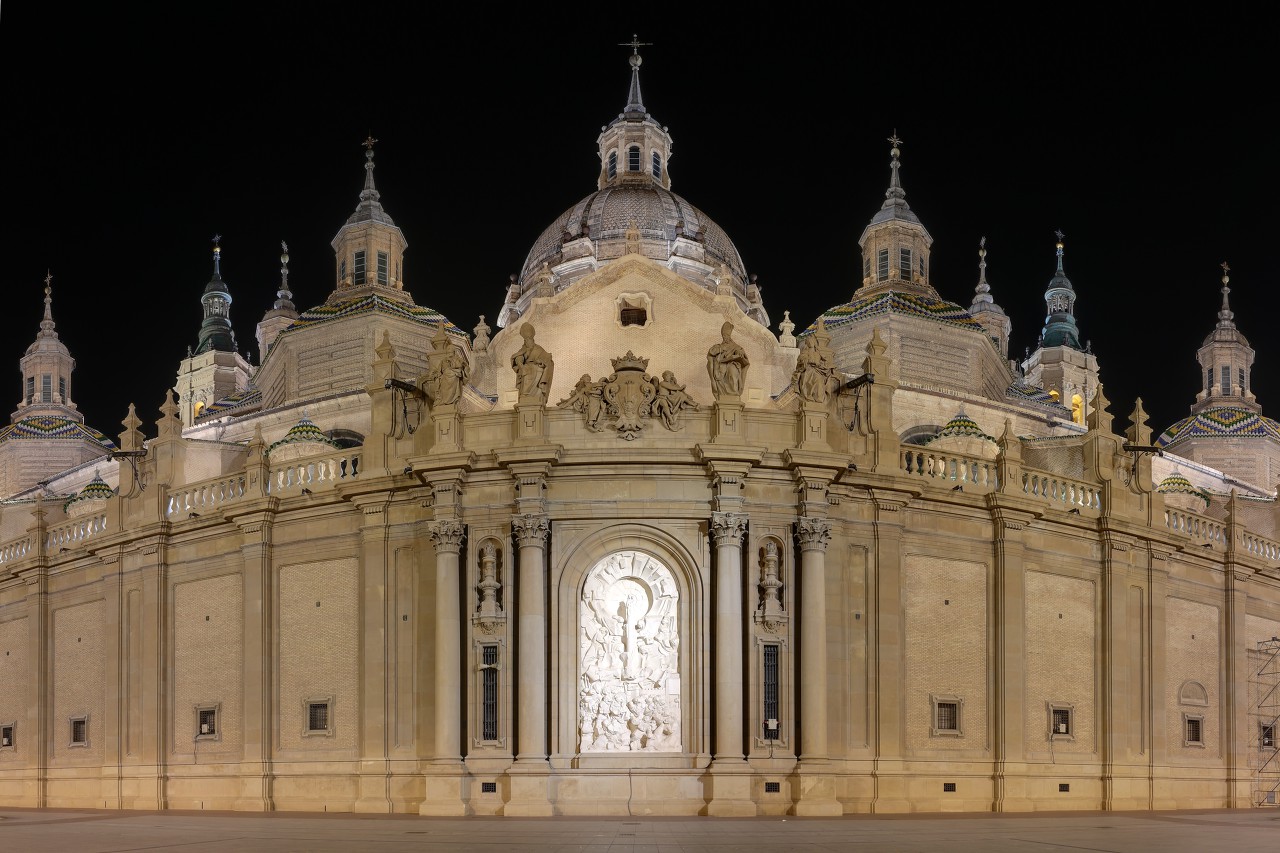 Alfonso I street divides the pedestrian zone of the historic center of Zaragoza in two. 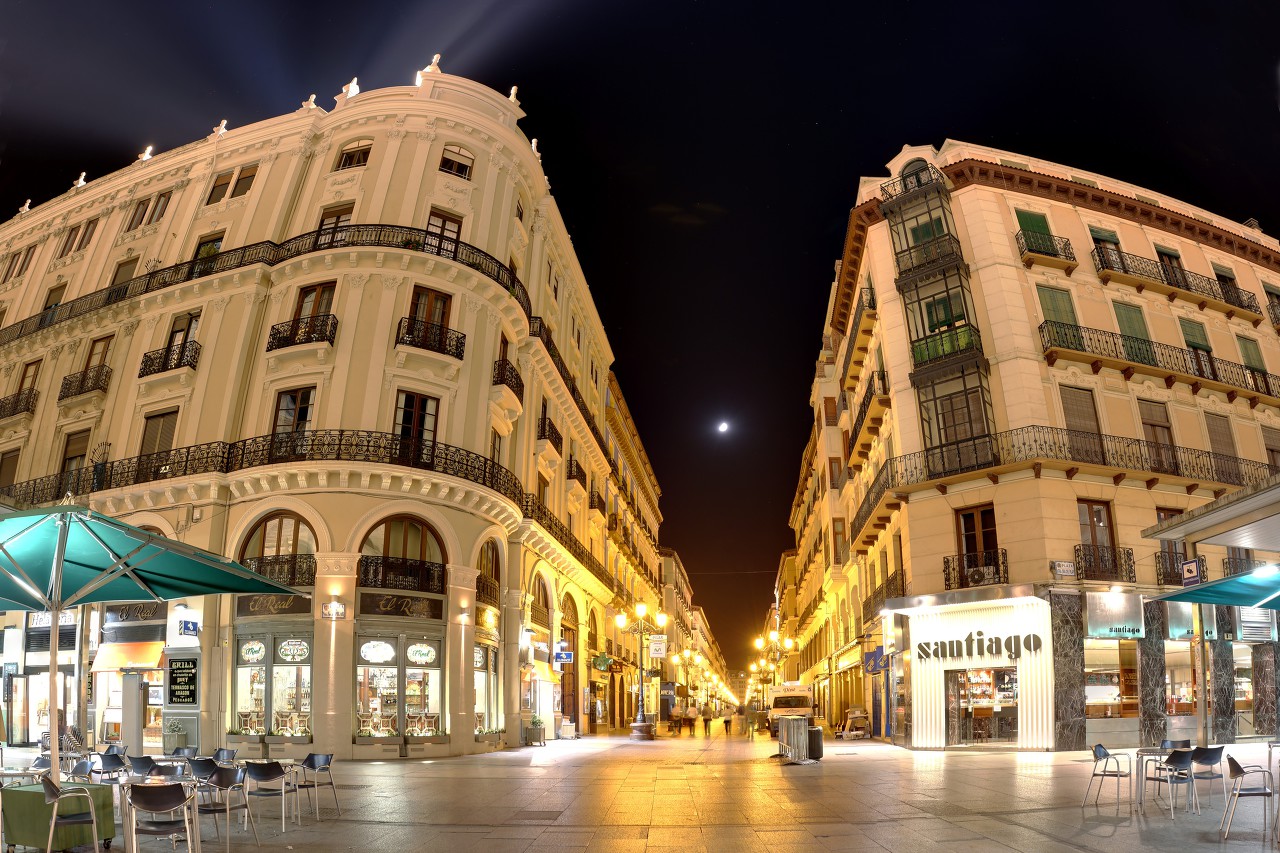 It was close to midnight and I went home. In early October, the nights in Zaragoza are still very warm, so despite the late hours, the street was busy, cafes and bars were open. 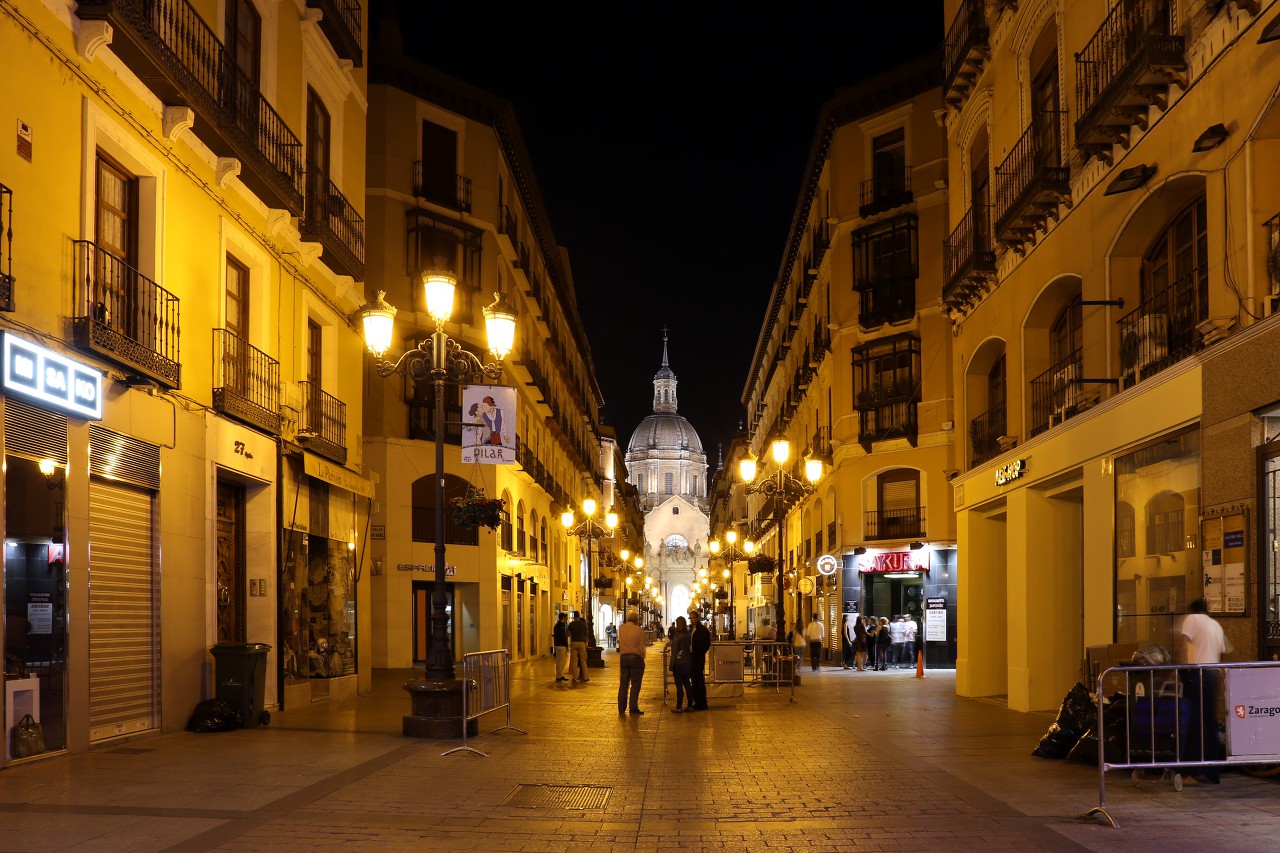 You can see the same images processed in HDR-style here: http://hdr.lpsphoto.us